The work of Auroville’s Land Board Part 2: The Secretarial Team

In April, we presented an overview of the multi-faceted activities of the Board and the associated teams. Providing the secretarial support for this enormous work are Anjali, Cleo and Jothi. We featured Cleo’s path to Auroville in our February “Newcomer” article. Now we have the pleasure of presenting Jothi and Anjali who have worked for the land for 14 years. This article tells their stories, and gratefully acknowledges their long-time skilled work and joyous presence.

Jothi and Anjali are among those who contribute to building Auroville through their employment and dedicated service and are an integral part of Auroville life. For them  – as for so many from the Auroville villages and nearby Puducherry region – Auroville is the focus for their lives and those of their families. Anjali and Jothi both work like devotees, for The Mother. They were both hired young, and they grew and developed alongside the land work as it grew. Their years of service have maintained continuity in the land work with every changeover of land management teams.

In 2008 when they were both independently hired, the responsibilities for Auroville’s land were carried out by two separate but coordinated teams: the Land Consolidation Committee (LCC) and the Land & Resources Management  Committee (LRM). The LCC was in charge of land purchase, consolidation and exchanges, with Lands for Auroville Unified (LFAU) in charge of fundraising under the LCC umbrella. LFAU’s Aryadeep, then as now, was in the forefront of fundraising communication and donor relations.

The other work pole of post-purchase and land management issues was managed by the LRM: surveying, fencing, land care, wood-cutting and wood sales, management of land leases, and actions for dealing with encroachments.

The early days with Aryadeep

Jothi was hired for the land work in January 2008. She comes from a Tamil family that for over two generations has had its life intimately connected with Auroville. She was born in Kottakarai village and was one year-old when her mother was hired to work at Bharat Nivas, a work she continued over the decades. Jothi’s father worked with Auroville’s land care, with Siddhartha Farm, Pitchandikulam and its activities in Chennai. Her husband has been employed as a skilled tailor for Auroville units.

Starting in 2001, Jothi worked in a variety of positions at Town Hall while finishing her studies. In 2008, she was a Town Hall Receptionist when Buvana, the land work secretary, recognized her qualities. Jothi was then hired as Buvana’s part-time assistant for land fundraising and some of the LRM work.

The next year, Buvana’s husband’s job was re-located and the family had to leave Auroville.  So Buvana trained Jothi to take over her tasks and in 2009, Jothi began full-time work as the LCC’s and LRM’s secretary. 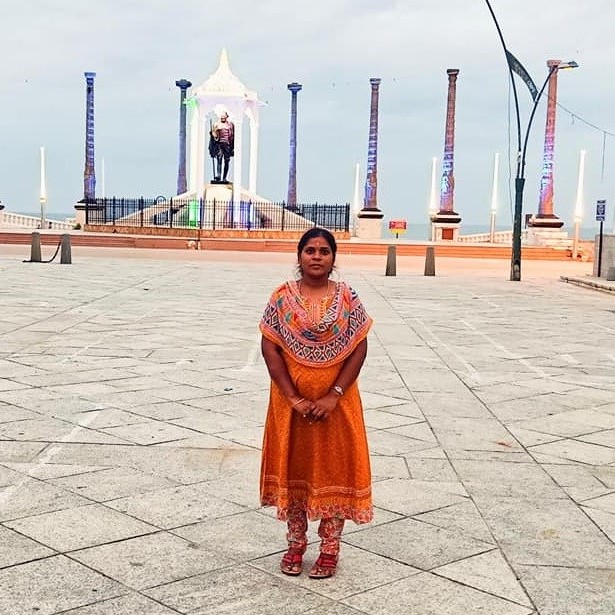 Anjali was born in Acharampattu Village in nearby Vanur, and grew up just outside Puducherry where she lives with her husband, a physical education teacher. Her association with Auroville is long-term, thanks to a family friend who joined Auroville and knew about Anjali’s computer degree and language skills.

She was hired in August 2008, initially to assist the LRM team with the transfer of the land registration documents from the Archives to the Auroville Foundation office. When that task was completed, Anjali was taken on in 2010 to work full-time, teaming up with Jothi for the ever-increasing and varied secretarial work concerning the land.

During the past fourteen years, together they have contributed to the development of the land work, and seconded each other in many ways. Just after Anjali was hired, Jothi became pregnant with her first child, and she trained Anjali to replace her.  Then, when Anjali became pregnant, Jothi was her replacement.

Now they are each mothers of two and manage the difficult balance of work, family life, childcare and transport needs, Both have the advantage of very supportive husbands who share many of the daily tasks. 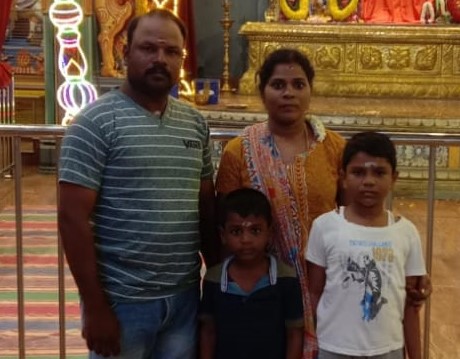 In September 2014, the Governing Board made the decision to consolidate the two land groups into one integrated team – the Land Board – with a division of tasks for the secretarial work.

With the 2014 separation of tasks, Jothi remained with her long-time land fundraising work. This was fortunate, for it coincided with the 2014 creation of the “Acres for Auroville” land fundraising campaign – a collaboration of LFAU with the worldwide centers of Auroville International – that was proposed by Mandakini of AVI-France, representing the AVI Board.

Anjali was asked to continue on with her focus on essential documents and procedures for land purchases, post-purchase issues, and land maintenance, working directly with the new Land Board, and providing essential collaboration for the land fundraising work.

Jothi’s experience and skills gave her a key role in the setting-up of A4A and enabled her to be a true co-creator for every aspect of this new large-scale action: A4A’s systematic donor response procedures, its detailed and transparent accounting reports, its complete record of funds spent for the land purchases made with A4A donations, the donor pages and A4A Success Barometer on the new land website that was created for LFAU by Sathish with Sigrid’s collaboration. These many innovations and Jothi’s scrupulous use of them are the essential elements for A4A’s success. The next year saw the launch of “Art for Land” by Mandakini, Jasmin and Aravinda as an A4A action in coordination with the Unity Pavilion’s Jaya and Claudine. That same year, Sigrid launched the GreenAcres campaign, specifically for Green Belt plots,  For the work and coordination of all these fundraising actions, Jothi is the pivotal point. She is in ongoing contact with the AVIs, and connects on a daily basis with Mandakini, who works from France.

Jothi says, “I like to be busy and always working. I feel good when we get new donations, no matter the amount, and also when donors appreciate our follow-up and how we have thanked them. I’ve been working for Auroville for twenty years and I feel that somehow Mother gave me this opportunity to serve.”

Anjali’s work is essential to the enormous work of the Land Board’s many teams: negotiation, resource, survey, maps, legal and field. She does book-keeping for the accounts, and liases when needed with the Auroville Foundation. Her job includes the massive organization and preparation of documentation related to land ownership, encroachments, disputes, due diligence processes,  patta transfers, court petitions for the many new cases and older pending ones. This is in addition to all the documents associated with the long step-by-step process of land purchase. Every aspect of this huge and varied work needs to be precise, correct, up-to-date, accessible, and ready on time.  Anjali also connects with Jothi on the funds needed for land purchases and then the confirmation of their registration.

Anjali says “I like the work of facts and figures. I’m doing responsible work for the Land Board where everyone has their different qualities and expertise. I work hard and I feel very good when new lands have been purchased for Auroville. Sometimes a purchase can happen pretty quickly, but sometimes only after many months or years of work!”

Cleo now works with Anjali on this large mass of essential tasks, with Anjali supporting Cleo in the work of creating an institutional memory database with the Land Board team – finally setting up a complete record of all land-related actions and events, past and present – the basic tool that had long been missing and is now growing daily. 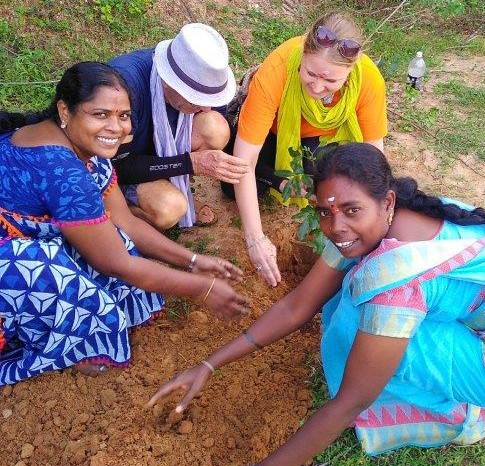 After all the hard work, the joy of planting on new Auroville land!

Aryadeep who has worked with Jothi and Anjali from the start praises their efficiency, honesty, motivation and reliability. “They have brought so much value by their service and sense of responsibility”, he says.

For Mandakini, “It’s a privilege to collaborate with them! By definition it isn’t easy to work long distance on so many important issues and in such detail, but with them, it is.”

Helena of the Land Board’s says “They are our angels”.

When asked what Auroville represents, and why it is important, Anjali says: “For so many years, I have commuted to come to work here in beautiful green Auroville. Auroville is very important because this is the place of The Mother”.

And for Jothi, who has spent all of her life here and twenty years working for Auroville: “Auroville is my world, Auroville is my future and also the future for my family.”

Anjali and Jothi, with their many years of sincere service are fully part of Auroville adventure, each making a substantial contribution every year to building the Auroville universal township!!

with our gratitude to the Land Board secretaries