Soon after arriving at the Ashram in 1968, I cycled into the countryside to see the internationally-
heralded city of Auroville, founded on the teachings of Sri Aurobindo. At the site, however, the
only evidence of the planned development was a white marble urn emerging from an empty red
plain. One had to smile at the surprised and quizzical expressions of other visitors. Clearly, after
reading the magazine articles and hearing the interviews about the new utopia, many expected
Auroville to be much more than this. For my part, to my “inner” eyes there rose on all sides the
shining buildings of the future City.

It was remarkable that from the beginning of Auroville one could sense its presence even at a
distance. Coming from Chennai into Tindivanam some 30km away, at one point there would be
a slight jarring sensation, as if tripping across a threshold. Then turning onto the quiet, narrower
road towards Pondy, overhung with the branches of venerable tamarind trees, suddenly one was
inside Auroville. This subtle consciousness radiating from the City was especially noteworthy
since no development had yet taken place on the land.

Early 20th century maps indicate extensive areas of forest covering the Auroville plateau.
Unfortunately, by 1968 most of the area had become barren and eroded. The native forests had
been harvested for construction in Pondy, for the railways and for fishing boats – with the
remainder consumed by charcoal burners. There were only a couple of mango topes on the
eastern and western slopes of the plateau and several Casuarina pine plantations. A kilometer
from the center, a small wild area of tall heritage trees and heritage plants grew around the Kali
temple. Here and there, a few gnarly neem trees stood alone in the midst of the vast fallow fields.
In the stillness of morning, one could hear a kilometer away across the flat open terrain the low
conversations of early-rising farmers going to their fields.

In the early days of Auroville, I began some experiments in regenerating the fertility of the soil
with dryland farming techniques – planting green manures like hemp and sesbania, then “plowing
down” the crops when they flowered in order to add nutrients and create humus. Press mud
from New Horizon Sugar Mills and sediments scraped from the Ousteri lake bed in the dry season
contributed body and tilth. Louis Allen from the Ashram’s Gloria Farm lent the use of his tractor,
trailer and implements. Friends from Kottakarai taught me that the modern disc harrow that
Louis Allen employed to cultivate the deep clay soil around Lake Estate undesirably brought up
Auroville’s sterile red subsoil – and that the traditional flat bullock-drawn plow was still the most
appropriate tool for conserving the thin layer of topsoil. I recall one day standing, mammoty in
hand (a light-weight, short-handled hoe), in the middle of a dwarfed and insect-ridden crop of brinjal thinking, “In Auroville, one
begins everything at the very beginning. Now I’m going to have to master 10,000 years of
agriculture.”

Tamil Nadu is ancient. The “Kottai” in “Kottakarai” (a village within the Master Plan area)
signifies a fortress. Although the settlement referred to has vanished millennia ago, a vestige can be seen in the Iron Age cemetery that extends from west of the Pump House to south of the Matrimandir
Gardens. Terracotta burial urns are exposed at the surface of the ground in eroded areas. Trade
beads and small archaeological artifacts are discovered randomly from time to time. One day,
near the Kali temple, I found a round amber quartz pendant, and offered it to Mother. She asked
me to show the inscriptions on it to Jagannath – the Ashram’s resident Sanskritist. He identified
the script as pre-Brahmi – probably originating some time before 400 BCE.

The huts that we began building in ’68 utilized traditional materials – coconut and palmyra leaves,
reed thatch, casuarina, earth and bamboo – but were of our own unique designs. Some of the
improvements I made to village practices were a) the incorporation of a stem wall so the
foundation of the mud wall would not be softened and the walls undermined by the monsoon (it
was typical in the village to rebuild earthen walls every year that had fallen outward); b) chicken
wire placed at right angles in the mud corners for strength; and c) added fibers to reinforce the
clay mixture and to provide for thinner walls. In ’71 Mother was shown photos of some Aurovilian
huts. She commented enthusiastically, “This is exactly what I saw.” This confirmed the confidence
I had then (and still have) that Mother saw and embraced every moment and stage of Auroville’s
elaboration – that her vision is not fixed solely upon the future architectural elegance of the
completed City.

Today in Auroville, there is a vibrant community of 3000. Many “pukka” and beautiful structures
have been constructed. The Matrimandir, central to the life and purpose of Auroville, stands as
the most visible sign of the reality that is steadily manifesting. When the last fragments of land
in the 500-hectare City Area are purchased (hopefully soon), the permanent foundations and
infrastructure of Auroville can at last be laid!

Here are some shots of that inspiring pioneering period – the first plantings, the traditional-
innovative houses & finally, a view of the upcoming Matrimandir as seen across the bare plateau: 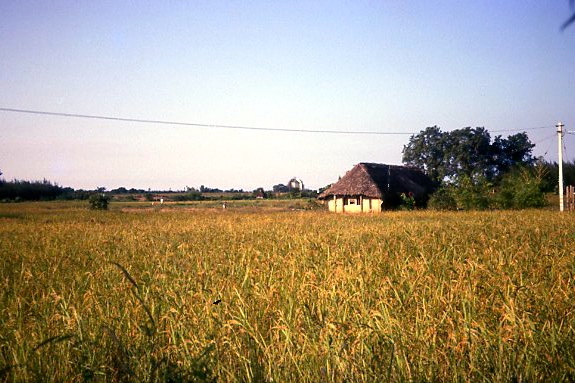 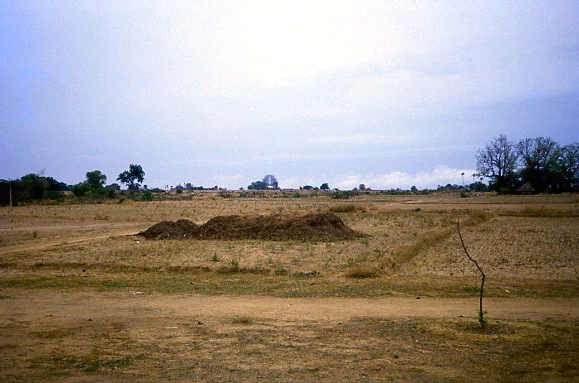