In 1975 I visited Auroville for the first time with Mauna and our son Satya. Mauna had lived in Auroville previously and I was very much interested in communal life. In January 1978, we returned to live in Auroville, settling in Center Field. Mauna worked with kids and I got involved in the Matrimandir workshop. It was during this time that we built and installed the crane that sat on top of the Matrimandir for many years to come.

Later in that first year, we moved to Forecomers where I lived for almost 18 years. Opportunities were in abundance. One could create endless versions of oneself while creating Auroville! I remained at the workshop for some time but eventually was captured by the utter necessity and delightful challenge of Greenwork. Auroville was then essentially a number of disassociated blocks of land. Settlements were scattered all over the plateau. And, like the land we lived on, most Aurovilians were in basic survival mode. We had to provide shelter, food, water and a social connectivity for ourselves. Without any form of electronics or phone then, we communicated with other AV settlements via messenger on bicycles. In those days, for a trip to Pondy we would usually allocate a whole day – bicycling out and back, plus lunch, shopping for supplies, and a cold soda or refreshing drink, as we had no fridges then.
At Forecomers, we had a community kitchen with a large round granite table where we shared meals and everything else. We made great peanut butter by hand with a meat-grinding machine, everyone taking turns cranking the thing. Eventually it got connected to a bicycle. Progress was made!

There was truly a palpable joy to being part of this noble undertaking, the Auroville experiment.
And due to the utter determination of the first inhabitants to make this project work – to manifest the dream – and with almost blind naïveté, we all charged ahead, making countless mistakes but learning everyday what it took to survive and later to thrive.
One of the initial “architectural efforts” in Forecomers by Bob and Deborah Lawlor (the first Aurovilians) was to build a large round sphere anchored between two Palmyra trees. It could be rotated to open to the outside or close itself off for protection and privacy. A unique concept! However, by 1978 only a few remnants of the sphere could be found. The two Palmyras remained.

Hand pumps were then the most common source of water. Shortly after my arrival in Forecomers I built a Savonius-style windmill to power our hand pump. This was a vertical windmill made of three levels of oil barrels cut in half. The barrels were welded in pairs to a pipe which was the axle they spun on. We stuffed the axle with prayers and mantras provided by Aurovilians. So when the windmill turned, it prayed, like a Tibetan prayer wheel. The erection of the windmill happened in one day with some 30 or so Aurovilians participating. It was like an old-time barn raising from the American West – only with cashew rice for lunch!

Almost all the lands designated for the AV project were in an extremely poor state. Farmers then could grow very little, nor was there much for domestic animals to graze on. Until Auroville, there was virtually no top soil left on much of the plateau. Aurovilians nurtured every form of life we could. We experimented constantly with the land and ourselves.

As AV started to grow in population, so did the dynamic energy of the community. People, ideas, energy and money wrought sweeping changes on this desolated and degraded land. As time went on, the area became visibly more productive and alive. Trees, grasses, and shrubs of all kinds started to grow where previously there were none. There were now gardens, crops of various grains, fruits, and other produce to provide for the nascent settlements. And yes, we grew peanuts too. The ancient red lateritic soil hadn’t seen so much happening in many decades. Life began to thrive again! 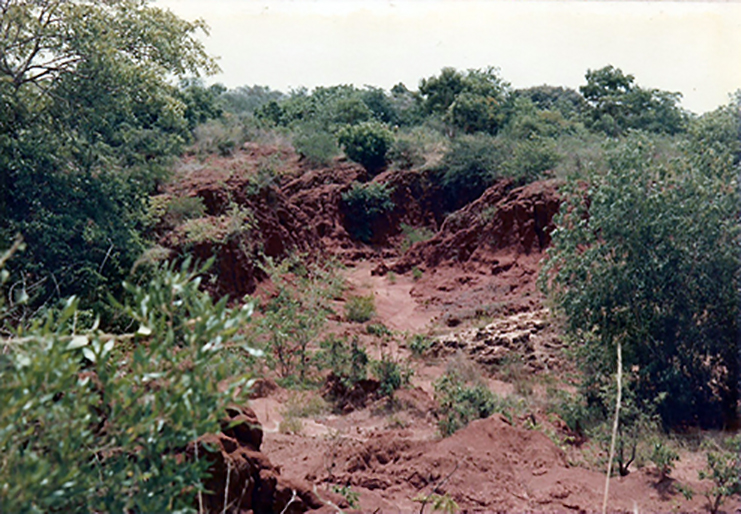 I recall that during the then seasonal monsoon, parts of the canyons around us would become like artesian wells, spewing out water that would find its way to the Bay of Bengal. That phenomenon has not happened for years now. Water was and will always be one of the greatest challenges to Auroville’s existence.
Greenworkers learned that to heal the Auroville plateau we had to reach out into the bioregion and beyond. Work was done to renovate the ancient systems of tanks. Beginning in Auroville, and then outside, we made countless miles of earth berms/bunds to retain and slow the movement of water so it could percolate into the ground. Another obvious answer to the hydrological problem was the establishment of trees. We experimented constantly with afforestation techniques and species. Auroville has since become very green.
As one consequence of providing a truly viable working model of successful afforestation, greenworkers have hosted and been invited all over India to do numerous trainings. During my time, Auroville shared afforestation and water control techniques in a training with “ALL” 26 Chief Conservators of Forest in India. We also hosted an afforestation training for the Indian Army. 10 high-ranking officers attended. Among its responsibilities for the defence of India, an important concern was to keep the roads passable, especially in the north where roads were seasonally eroded and constantly crumbling. Juergen Putz led the training for the Forest Department officials. Jaap and I were mainly responsible for the Army training.
Eventually, the surrounding villagers began to see that those strange foreign folks doing so many unusual and bizarre things actually stayed and wanted to live there! Auroville was becoming accepted as another village in the area. Working with our surrounding neighbours, and reaching out to the rest of India, Auroville has provided and is still developing new models to offer for the solutions so badly needed for our common future!
Securing the remaining lands designated for Auroville and connecting its internal parts remains a basic need – for infrastructure, roads, communications, water, power, food production, wildlife & environmental health, and for enhancing its relationship with its surroundings, India and the world.